One who calls himself a Sikh of the Guru, the True Guru, shall rise in the early morning hours and meditate on the Lord's Name. Upon arising early in the morning, he is to bathe, and cleanse himself in the pool of nectar. Following the Instructions of the Guru, he is to chant the Name of the Lord, Har, Har. All sins, misdeeds and negativity shall be erased. Then, at the rising of the sun, he is to sing Gurbani; whether sitting down or standing up, he is to meditate on the Lord's Name. One who meditates on my Lord, Har, Har, with every breath and every morsel of food - that GurSikh becomes pleasing to the Guru's Mind. That person, unto whom my Lord and Master is kind and compassionate - upon that GurSikh, the Guru's Teachings are bestowed. Servant Nanak begs for the dust of the feet of that GurSikh, who himself chants the Naam, and inspires others to chant it.

From the time of its arrival in France in 1914 to April 1915, the 1st Battalion 9th Bhopal Infantry was virtually decimated on the Western Front. The regiment suffered heavy losses at the Battles of La Bassée, Neuve Chapelle, Festubert, Givenchy and the second offensive of Ypres.

In 1915, they were sent to the Tigris Front in Mesopotamia. Where as in France, they were engaged in fierce fighting.

By the time the regiment returned home in March 1919, only 15 men remained of those who had sailed for France in 1914.

Remembered at YPRES (MENIN GATE) MEMORIAL over 700 other soldiers fell that same day. Including those of the 1st Bn. 9th Bhopal Infantry: 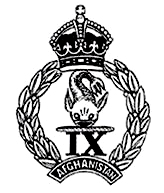 During the night the cavalry were relieved and a small salient opposite Bois du Biez relinquished to straighten the line; 29/10/1914 a patrol entered Neuve-Chapelle and found it empty but during the day German bombardments and probing attacks were received all along the line. The junction of the 13th and 14th brigades near La Quinque Rue and Festubert was attacked at about 4:00 a.m., when the Germans moved quietly forward in mist but were then caught by artillery and small-arms fire. A second attack just to the north occupied a British trench and at noon another attack was attempted after French shells were seen to drop short. This attack was also repulsed and a brief respite followed until after dark when German troops moved stealthily into the village. In the subsequent fighting they were repulsed three times. Successive attacks on the Indian Corps troops further north were mostly defeated by artillery-fire.

"For most conspicuous bravery and devotion to duty in leaving cover to assist his Commanding Officer who was lying wounded and helpless in the open. Sepoy Chatta Singh bound up the Officer’s wound and then dug cover for him with his entrenching tool, being exposed all the time to very heavy rifle fire. For five hours until nightfall he remained beside the wounded Officer, shielding him with his own body on the exposed side. He then, under cover of darkness, went back for assistance, and brought the Officer into safety." London Gazette